All dogs win a place in our hearts. Bowa actually wins in the arena. He is currently the #4 Australian Shepherd in the United States right now for upper level obedience trials. Bowa is named after the MLB baseball player and manager, Larry Bowa, and shares the shortstop's love of competition.

Bowa also competed successfully in herding trials but injured his CCL two years ago. He was put on the DL list for a month and turned his attention to competing in obedience trials only. Nine-year-old Bowa is part of an entire family of Australian Shepherds owned by Laura H., who treats each and every dog like they are her own children.

Recently Bowa was out playing with his siblings and accidentally re-injured the same leg. Laura knew to be concerned this time when Bowa wasn't able to just "walk off" his injury, and she contacted her vet immediately.

Joe Consigli, DVM works at Quakertown Veterinary Clinic in Pennsylvania. The clinic is a top-notch facility in the area helping animals for over 100 years with 24/7 care. Dr. Consigli originally recommended surgery for Bowa.

But Laura had reservations, "At Bowa's age, I couldn't see him going through the surgery and laying around in a crate for 10-12 weeks, watching the other dogs playing, going in and out, and going to shows. I just knew it would age him mentally." She was also apprehensive how Bowa would react to the anesthesia and was worried about complications. She did some research online and shared information about Hero Braces with her vet.

The concept of bracing is not new to the Quakertown Veterinary Clinic. They currently have four other dogs with braces for CCL tears, but Dr. Consigli was very impressed by the quality, craftsmanship and functionality of the Hero Brace. They decided to have Bowa serve as the trial dog for Hero Braces.

The casting process went smoothly. Dr. Consigli and Laura watched the Hero casting videos before casting Bowa. While some dogs may need some mild sedation, Bowa was able to just lay down still on the floor while Dr. Consigli and a vet assistant made the cast. Dr. Consigli was impressed with the the casting kit as a whole. The buffer strip and hook knife made the removal of the cast a simple process.

Bowa received his finished brace a few weeks later and was a little apprehensive when it was first put on. After faithfully following the adjustment process, he now knows he can trust it. Bowa is walking, running, swimming and using all four feet instead of three. "He can even jump up into the truck and on the bed," says Laura. "Which I really don't encourage but that's Bowa. At this point in his life, if that's what makes him happy, then it's OK. I love to see him happy."

Just eight weeks after Bowa's injury, Laura is now able to take him on two mile walks with the rest of her fur family. He does wear the brace faithfully all day and only has it off at night when he's in his crate.

"I hope he keeps getting better to the point where he won't have a limp at all and we'll be able to return to the show ring,"  Laura says. "But if not, at least I have my happy, sweet, mommy's-boy Bowa, and he's able to get along just fine with the brace on."

While he might not win the World Series, and his winning of show trophies may be put on hold for a while, Bowa definitely knows how to win hearts. Play, Bowa. Play. 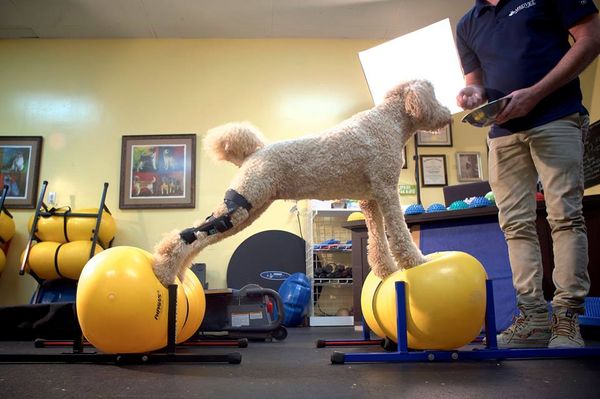